APPLICATION OF 18O AND 13C STABLE ISOTOPES COMPOSITION OF THE CARBONATE ROCKS OF THE JERIBE FORMATION EASTERN IRAQ; AN APPROACH TO DEFINE THE PALEO TEMPERATURE AND PALEO DEPTH

Stable isotopes 18O/16O and 13C/12C in the carbonate rocks of the Jeribe Formation are examined here to define the depositional characters in the basin
includes paleo temperatures and paleo depth.
The Jeribe Formation comprises a transgressive unit belongs to the Latest Eocene-Recent Megasequence (Ap11). Complete sections of the formation were
studied in the core of Himreen structure in eastern part of Iraq. The Himreen structure lies in the outer platform margin of unstable shelf of the Arabian plate. The stable isotope (18O/16O and 13C/12C) of Jeribe Formation provides the first records of paleotemperature for the Neogene (middle Miocene Transgression) of the Southern Teythes, which indicate cooling during deposition. Microfacies study imply that the skeletal grains are composed of green and red algae, stromatolite and verities of benthic foraminifera. The non-skeletal grains are pellets and intraclasts. Analysis of microfacies suggests lagoon, reef, shoal and open marine environments. The depletion of both 18O and 13 C indicated shallowing at the contact with overlying and underlying formations in the shoal and lagoonal facies respectively. While in the middle part in the coral reef facies reveals elevation of the sea surface temperature. These suggest that the enrichment of both 18O and 13 C at the cool water temperature associated with upwelling and arise of sea level represented by reef and open marine facies. 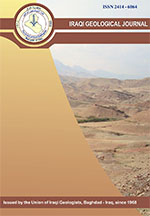